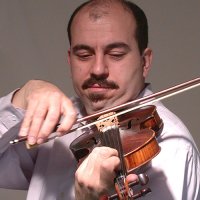 Born in 1966 in Thessaloniki. He studied music theory and violin at the Conservatoire of Northern Greece and worked with the State Orchestra of Thessaloniki and chamber music ensembles. He is a member of the Ensemble of Traditional Music of the municipality of Thessaloniki.
Since 1980 he has collaborated with many musicians and orchestras in Greece and abroad, in traditional music concerts, but also in classical music, rebetika, and Greek sophisticated music concerts. He has taken part in more than a thousand concerts and musical events, as well as in numerous recording sessions. His recordings start from 1989 and ever since he has collaborated with all major representatives of the Greek traditional music.
Founder member of the orchestra Estoudiantina Neas Ionias. He was also chosen by the School of Oriental and African Studies (SOAS), University of London, to represent Greek traditional music in the Festival ‘Genius of the violin’ (2004).
From 1996 he is a member of the group “Primavera en Salonico”, touring with Savvina Giannatou all over the world in numerous concerts.
In the period from 1997 to 2018, he taught the violin at the Department of Traditional Music of the Technological Educational Institute of Epirus in Arta, at the Department of Musical Science and Art of the University of Macedonia, at the Athens Conservatoire, at the School of Byzantine Music and at the 'Philippos Nakas' Conservatoire in Thessaloniki.
He has taught Greek traditional music, and especially violin, in various music seminars abroad. Some of them are: the Summer Music Academy in Belgium, the SOAS in London, the Rebetiko Team in Paris and the Fiddlers on the Move Festival in Gent.
As a musician and teacher, he organizes various seminars and concerts in many parts of Greece, like the Music Village in Pelio, Music Yards in Ikaria, Rebetiko Festival in Syros and Music Meeting in Taygetos.