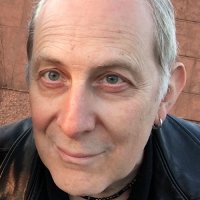 Michael Alpert has been a pioneering figure in the renaissance of East European Jewish music and Yiddish culture since the 1970s, and is a National Heritage Fellow of the United States — the US’s highest honor in the traditional and heritage arts. Multi-instrumentalist, singer, ethnographer, scholar and educator, he is internationally known for award-winning performances and recordings with Brave Old World, Itzhak Perlman, Khevrisa, Kapelye, Frank London, Socalled, Daniel Kahn and others. A native Yiddish speaker and bridge to East European-born Jewish musicians, Alpert is a foremost traditional Yiddish singer and composer of new Yiddish songs, and is credited with reintroducing the traditional sekund style of rhythmic and chordal violin playing to contemporary klezmer music. With broad knowledge of the musics and languages of Europe and the Americas, he has been both instrumental and vocal in transmitting East European Jewish traditional music and culture to younger generations. Longtime research associate of NYC’s Center for Traditional Music and Dance and now of the Centre for Art and Politics at the University of St Andrews, Alpert is translator and co-editor of Soviet Jewish ethnomusicologist Moyshe Beregovsky’s Jewish Instrumental Folk Music (Syracuse University Press 2001) and co-editor with Kurt Bjorling of its subsequent editions (2015-present), and his own ethnographic fieldwork recordings (1968-present) were recently acquired by the US Library of Congress. Hailing from both Southern California and New England, he is now tri-coastal, at home on the coast of Scotland with literary scholar Emily Finer and two mist-shrouded cats.