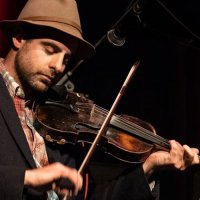 Craig Judelman grew up in Seattle (USA) where he studied classical violin from a young age, soon branching out to jazz, klezmer and various kinds of folk music. He went on to study composition as well as classical and jazz violin at Bard College in New York.

Craig first made a name for himself in New York as an American ‘old time’ musician, where his band, The Dust Busters, released an album with their mentor John Cohen on the Smithsonian Folkways Label. He later joined the band Litvakus, one of the only contemporary bands devoted to the regional style of the Northern European, or Litvish Jews. In recent years he has devoted himself to intensive study of Jewish fiddlers recorded in the early part of the 20th century, as well as deepening his understanding of the Litvish style.

Craig began singing in the synagogue as a young boy and has learned Hassidic music around many tables from Brooklyn to Jerusalem, in addition to studying it with friends, rabbis and musicians. While not a Hasidic Jew himself, he continues to learn and teach the Hasidic music and ideas and integrates them into his own Jewish practice. He also loves sharing this rich tradition with people of all backgrounds from around the world.

Craig lives in Berlin, where he is a co-founder of Lebedik, together with Sasha Lurje, a band devoted to Yiddish song in its many forms which perform as a trio with Sanne Moericke as well as with various friends including Lorin Sklamberg, Michael Alpert, Bob Cohen, Ilya Shneyveys, Mark Rubin and others. Craig has taught and performed at numerous festivals throughout Europe and the USA and is on the organizational team at the Shtetl Berlin festival and Seattle Yiddish Fest.