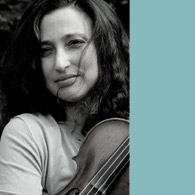 Deborah Strauss is an internationally acclaimed klezmer violinist and educator who has been active in the klezmer and Yiddish music scene for over 30 years. She is a member of the Strauss/Warschauer Duo, was a long-time member of the Klezmer Conservatory Band and has performed with the Klezmatics. She has appeared on numerous recordings and was featured in the Emmy Award-winning film Itzhak Perlman: In the Fiddler's House. Deborah has performed and taught at the Jewish Culture Festival in Krakow, Yiddish Summer Weimar and KlezKanada. She is also an award-winning children’s educator and a highly regarded Yiddish dance leader.

Deborah studied violin at Rutgers University and ethnomusicology at the University of Chicago. She has a deep knowledge of Jewish culture that stems from her upbringing in a traditional Jewish home, and from extensive formal education in Jewish studies, including Hebrew and Yiddish language.

Deborah is co-director of the instrumental music program at Yiddish New York and, with Alan Bern, the author of Klezmer Duets for Violin and Accordion, published in 2017 by Universal Edition, Vienna.