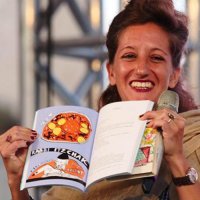 Miriam Camerini was born in Jerusalem on Purim night of 1983 and grew up in Milan, Italy. A theatre director, performer, writer and orthodox rabbinical student, Miriam believes "interpretation" is a key word to describe her work, between theatre, music and the interpretation of "sacred" texts. Miriam graduated in Theatre Studies at the State University of Milan defending a paper on Gotthold Efraim Lessing's play Nathan the wise and the presence of Jewish Characters in German plays of the 18th century. Miriam studied Theatre at the Paolo Grassi School of Milan and Jewish Studies at the Pardes Institute in Jerusalem and is now a rabbinical student at Beit Midrash Har'El, one of the first orthodox institutions to ordain women rabbis: she might become Italy's first orthodox woman rabbi. Miriam published a book about food and religions, Ricette e Precetti (Giuntina, Firenze 2019), which was published in Germany with the title Rezepte und Gebote by Hentrich und Hentrich in December 2021. Miriam is very active in interfaith work, she writes for different papers and lectures regularly at universities, schools, festivals and other frameworks about all aspects of Jewish life, rituals and culture, biblical and rabbinical literature. A theatre director, writer, singer and actress, she worked with Cesare Lievi at the Opera House in Zürich and with Lorenzo Arruga at Teatro La Fenice in Venice. At Yiddish Summer Weimar she has performed in the Bobe Mayses project and directed Di Megile fun Vaymar in 2019.