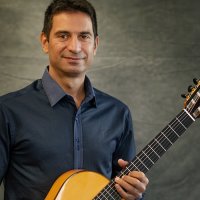 Vassilis Ketentzoglou is a guitarist, composer and orchestrator. He has collaborated with many  well-known Greek artists (such as G. Dalaras, N. Xydakis, E. Arvanitaki, V. Papakonstantinou and others) and with several orchestras (like the Ossipov State Russian Folk Orchestra, the Istanbul State Symphony Orchestra, the CityMusic Cleveland Orchestra, the Athens State Orchestra and the Armonia Atenea - The Friends of Music Orchestra) and has performed in concerts all around Greece and in many distinguished concert venues abroad (Austria, Belgium, Cyprus, Czech Republic, France, Germany, Netherlands, Hungary, Israel, Japan, Spain, Sweden, Switzerland, Turkey, UK, USA).
Some of his own compositions can be found in recordings with the Guitar Kanun Duet (V. Ketentzoglou & S. Labropoulou), A. Toubanaki & the Buzz Bastardz, N. Xydakis, F. Velesiotou and S. Papazoglou.

Vassilis holds a MMus in Composition for Screen by the Royal College of Music (London, UK), a BMus (Hons) degree in Music by the Royal Holloway - University of London, and the Degrees of "Classical Guitar Performance", of "Harmony Specialist", of "Counterpoint" and of "Fugue" by the Hellenic Conservatory.